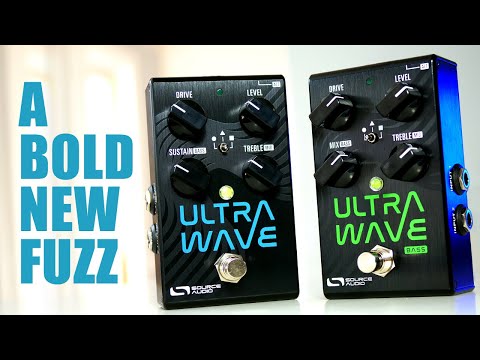 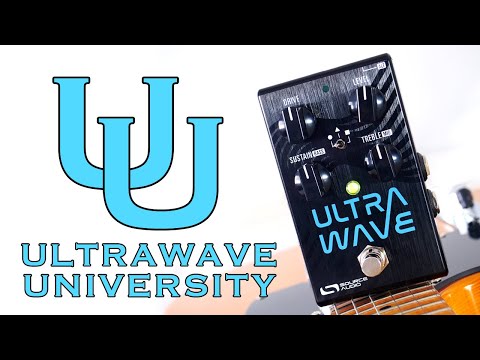 Transform Your Guitar Tone with Multiband Saturation and Tremolo

It’s safe to say bands like Muse and Rage Against the Machine wouldn’t have made their marks without the quixotic tone tastes of Matt Bellamy and Tom Morello. If you’re the type of player who shares a penchant for nontraditional fuzz/distortion sounds and synthy cascades of color, there’s a slew of gooey, glitchy character tones to be discovered in the Source Audio Ultrawave pedal. A unique multiband approach to tone structuring gives the Ultrawave the edge for the hard-clipped squelchy fuzzes and infinite-sustain exploratory leads that are so hard to achieve with traditional clipping circuits.

Ultrawave splits polyphonic synth and guitar signals in up to 10 bands and lets users crank and saturate each to taste, yielding some of the filthiest riff distinguishers on the planet. Naturally, Ultrawave does doom, desert, and industrial with aplomb. But this pedal’s softer side will surprise you. A mature multiband compressor and a custom-waveform stereo tremolo can be called up quickly using the free Neuro Editor desktop/mobile app. Speaking of which, tone chasers will love all the bells and whistles inside Neuro Editor, where you’ll find loads of fresh-baked factory presets waiting to transform your pedestrian guitar/synth lines into surges of supermassive hysteria.

A pioneering approach to traditional effects
The Source Audio Ultrawave pedal takes a pioneering approach to traditional broadband overdrive, tremolo, and compression effects. By splitting each band of a polyphonic guitar or a synthesizer signal into up to 10 bands and letting users treat each band as its own signal — each complete with its own adjustable parameters — Ultrawave is able to forge new ground for the adventurous sonic spelunker.

What can the Ultrawave do?

Ripe for sonic experimentation
The Source Audio Ultrawave is for any guitar/synth player who’s mental about the experimental. If you’ve got a will for uncovering a particular type of uncommon distortion effect, the Ultrawave more than likely has a way.

Spans nuanced effects to sonic extremes
The multiband Ultrawave can achieve so many sounds that’s it hard to put a finger on what it sounds like. It’s West Coast doom with a high-rising terminal. Retrofuturism with a side of synthwave. A sputtering Tesla coil fed by a starved watched battery. A symphony of clipping diodes. A pathway to chiptune nirvana. A synthesist’s holiday. Stoner rock a-go-go.

And that’s just to call out its extremes. The Source Audio Ultrawave certainly packs more nuanced effects, including tubelike overdrive, throbbing opto-tremolo, and even ultra-clean multiband compression and arpeggiation.

Tap into Ultrawave’s potential with the Neuro Editor (Mac/PC/iOS)
Obviously, a pedal as sophisticated as the Source Audio Ultrawave can be a little daunting for players to dive right into. Fortunately, a wealth of artist presets can be accessed within the free Source Audio Neuro Editor desktop software and mobile app. Whether you’re looking for a special tone to make an instrument part pop or you just want an entry point to building the tone of your dreams, the Neuro Editor is the place to start working your way into all Ultrawave can accomplish. Neuro Editor also makes a one-stop shop for the sonic fruits of your tonal labors — you can catalog favorites and user presets for later recall.