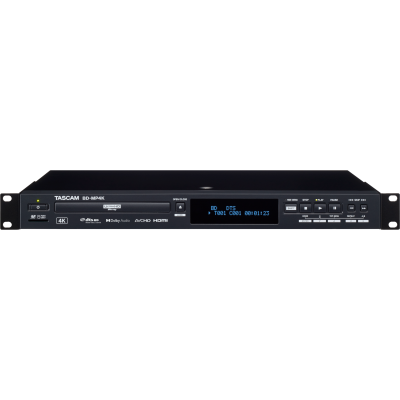 Handle all popular video and audio formats with one high-performance playback unit
As a remote-controllable, professional-grade 4K UHD Blu-ray player, the Tascam BD-MP4K is the perfect choice for a wide range of commercial installations requiring ultra-high definition image quality, including public, educational and commercial facilities, theaters, amusement and entertainment businesses, to name but a few.

Occupying only one height unit in the rack, the compact BD-MP4K saves space by eliminating the need for discrete audio/video playback devices in an installation rack. It accepts a broad range of media and file formats from discs (Blu-ray, DVD, CD), USB flash devices, SD cards or even Samba network shares on a NAS or remote server through Gigabit Ethernet.

In addition to remote control operation, all playback functions can be accessed locally from the front panel if desired. There are also separate lock features for panel, tray and IR remote control to prevent accidental changes or non-authorized use.

Connection of display monitors or televisions is quick and easy via two plug-and-play HDMI ports on the rear panel which support both HDMI 2.0 and 1.4 (audio only) formats.

Typical Tascam: A bit more of everything
When it comes to professional audio quality and commercial integration, the BD-MP4K is pure Tascam. Individual connectors for 7.1 Surround Sound are provided on the rear panel for fully immersive, rich audio playback in any installation. Professional-grade XLR balanced stereo analogue outputs as well as RCA unbalanced stereo outputs are also available. And a coaxial output can deliver professional-grade digital audio formats including Dolby, DTS, and two-channel linear PCM (SPDIF).

With its high image resolution and superb audio quality, support for virtually all common media and file formats and comprehensive connection and configuration options, the BD-MP4K meets even the highest demands making it the ideal choice for professional use in permanent installation or touring.

Playback From a Variety of Media Types
The versatile BD-MP4K supports a wide range of media formats including Blu-ray, DVD and CD as well as files on USB Flash Memory, SD cards and network shares. As a single-source playback device, the BD-MP4K eliminates the need for discrete audio/video playback devices in an installation. The extensive range of supported file formats includes

Ports for External Media
An SDXC slot on the front panel and and a USB 3.0 port on the rear allow fixed or interchangeable access to external media.

Playback From Network-Attached Storage (NAS) or File Servers
Using a Gigabit Ethernet connection, the BD-MP4K can play back files located on a remote server and accessible via a Samba network share (SMB/CIFS).

Professional Features for Professional Operation – Power-on Play and Repeat Mode
Using its Power-on playback feature, the BD-MP4K is able to begin playing immediately on power-up. Combined with the repeat mode, content will automatically start, loop and play continuously until system power is turned off again. In installed setups, this means a single power-up of the integrated AV system will start playback of announcements, commercials or other content in a loop without having to press any button on the player itself

Panel Lock for Secure Operation
Operation can be protected from accidental settings changes or non-authorised use via panel and tray lock features. In addition, the infrared remote control can be locked to prevent, for example, alteration of pre-set controls in commercial environments, helping ensure consistent and reliable performance in any installation.

Elegant Power-Up Display Sequence
The monitor display can be set to show a black screen during start up rather than the manufacturer’s screen with menu items, creating an elegant and non-distracting visual start-up environment each time the system is turned on.

Output Options for Virtually Any Use Case – Two HDMI Outputs for Projectors, Screens and Audio Systems
A standard HDMI output provides easy, reliable plug-and-play connection to any HDMI-compatible monitor display, projector or television. This output supports HDMI CEC which allows the connected display to be switched on/off in correct order and also allows HDCP non-compatible devices to be connected.

7.1 Surround Sound System
For immersive and full, rich audio playback in any commercial installation, separate 7.1 Surround Sound outputs are provided. Use these outputs to feed an appropriate Surround amplifier or separate power amplifiers for larger locations.

Infrared Remote Control
The included IR remote control allows most of the functions and menus to be operated with ease.

Fully Accessible Control Panel
Control and operation of the BD-MP4K’s Stop, Play, Pause and Fast Forward functions as well as navigation of the menu is made possible by easily accessible front-panel control buttons which can be locked as desired to avoid inadvertent operation by unauthorised persons.