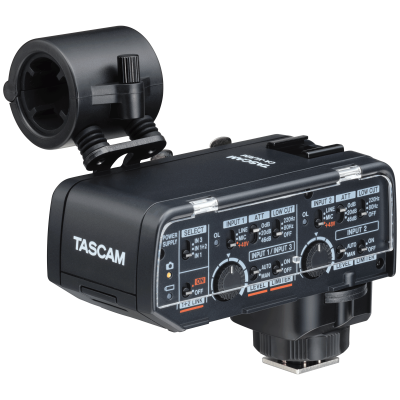 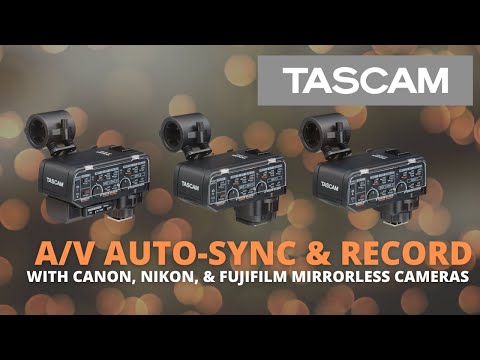 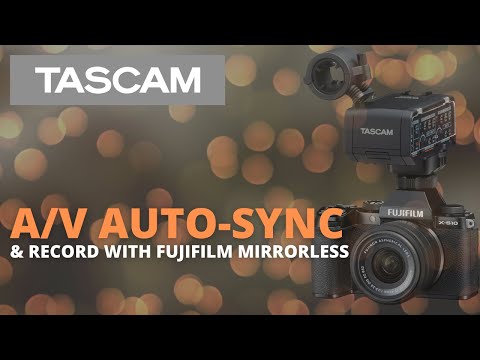 A Flexible Concept for Recording Professional Audio With Virtually Any Camera
The CA-XLR2d-f is a two-channel microphone adapter and preamplifier that allows external microphones to be used to record high-quality professional stereo sound with a mirrorless or other camera. The audio signal is transferred directly to the camera – in digital or analogue form – and recorded along with the video signal, eliminating the need for subsequent synchronization and reducing post-production time.

Choose the Most Suitable Microphone for Your Film Recording
Choose the appropriate microphone or input that matches your application. From a single shotgun mic for interviews or dialogue, to dual dynamic or condenser mics for stereo imaging, or the entire audio mix fed from the main mixer using a line-level connection – with the CA-XLR2d you are well prepared for whatever shooting and filming is ahead.

High-Performance A/D Converter for Pristine, Natural Sound
Thanks to Tascam’s long-standing expertise in audio technology and premium A/D converters, the CA-XLR2d stands for clean, noise-free, professional sound. By sending a digital audio signal directly to the camera via a compatible accessory shoe, there is no second conversion step which could add noise or distortion. And it frees you from the work of subsequently synchronizing picture and sound in post-production.

The CA-XLR2d is powered by a compatible camera via its hot shoe which means you don’t need an additional power supply and your setup remains compact and clean (compatible manufacturers: Canon, Fujifilm).

Use The Microphones And Other Equipment You Need for Your Session
The CA-XLR2d is so flexible that you can use it with the microphones and gear you need for your particular film session. The top-mount cold shoe, for example, is resistant to vibrations, noise-friendly and can hold your favourite mic or a wireless receiver or transmitter. Two XLR/TRS input terminals and one 3.5-mm stereo mini input are available for virtually any dynamic or condenser handheld, shotgun, lavalier or other microphone.

Built-In Processing With User-Friendly Control for Highest Recording Quality
The included audio processing features such as auto-level, low-cut filter and limiter can be accessed using convenient switches. The CA-XLR2d can also link two input channels, which allows you to control the input gain as well as the LEVEL and LIMITER settings simultaneously for the left and right channels when recording in stereo.

Achieve High Sound Quality With Your Current Camera
Don’t worry if your camera’s hot shoe cannot handle a digital audio signal nor power the Tascam mic adapter. The CA-XLR2d-AN analogue kit can be used with virtually any camera that has an analogue audio input. Attach the included battery box (two AA batteries) and connect the analogue output of the CA-XLR2d to the microphone input of the camera with the included stereo audio cable. This allows you to benefit from the high-quality microphone preamplifiers and audio processing functions and significantly improve the sound of your film recordings.