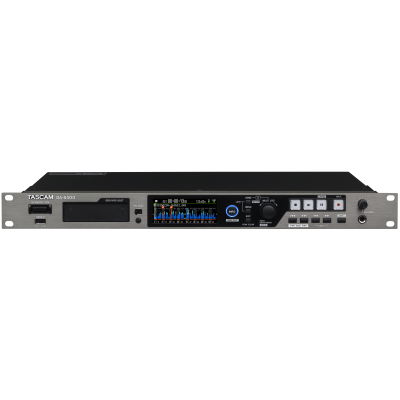 The DA-6400 is a universal recording system for up to 64 audio tracks received from a Digital Audio Workstation or live mixing console. The recorder can be used with a variety of interface boards like MADI, Dante, DigiLink, AVB or AES/EBU to integrate flawlessly into virtually any environment. Moreover, Tascam plans to maintain the recorder as a living system by adapting it continuously to new interfaces and systems according to the needs of users.

PCM recording/playback from 48 kHz to 96 kHz maximum is supported for compatibility with existing recording studio systems, PA systems and other recording situations where high sampling rates are being utilized.

By installing SSDs into removable AK-CC25 storage cases and using the swappable bay in the DA-6400 unit, it is easy to switch and use multiple drives. Since the DA-6400 is hot-swappable, it is possible to remove and load SSDs stored in AK-CC25 cases even when the power is on, making rapid switching of media possible. SSDs stored in AK-CC25 cases can be connected to computers by USB and used as external drives.

Note: One AK-CC25 and one TASCAM SSD are included with each DA-6400/DA-6400dp unit. Additional cases and drives can also be purchased separately.

1U size enables installation where rack space is at a premium
A single DA-6400 can record and play back up to 64 channels but requires only a small amount of space for installation due to its compact 1U design.

Playlist function to play audio in the order you want
The playlist function available since firmware v2.00 makes it possible to assign takes to a list in the order you want, change playback order, and nondestructively set playback ranges of every audio entry without affecting the audio files. In addition, loading and writing of JPPA flash start playlist files is supported. After a take from a playlist ends, when Auto Ready mode is enabled, the unit automatically jumps to and pauses at the beginning of the next starting point.

Theater Play function to play selected ranges of multiple takes in order
The theatre play function introduced with firmware v2.00 allows marks to be set for playback starting and ending points on each take. This makes it possible to trigger marked playback ranges of multiple takes in order. In this mode, the unit enters playback standby at the first mark and starts playback when a play trigger is received. When the end of the range is reached, the unit stops playback automatically, locates the beginning of the next range and reenters standby. In addition to ordinary playback operations, external control using the serial or parallel port can also be used to send play triggers. In this way, you can assemble playback material according to your wishes and play it back in the desired order either manually or automatically.

Backup operation synchronized to ProTools
The DA-6400 is capable of receiving timecode input from a ProTools system for backup recording with synchronized operation. Using serial/parallel control, you can control DA-6400 recording operations from ProTools.

Perfect as a backup mobile recorder in a variety of live recording situations
The main unit of the DA-6400 weighs 3.5 kg, enabling great mobility when used as a backup recorder – perfect for transport to a variety of locations. It can also be used in applications where recording/playback of rehearsal audio is required, or where a ‘virtual soundcheck’ is needed – as in live touring.

BWF format for easy data transfer to DAW software
BWF is supported as a recording file format, and time information can be stored in files, making file searches and importing files into ProTools and other DAW software easy.
Note: Time information input through the TIMECODE IN can also be captured and written to files.

1000BASE-T Ethernet and file transfer by FTP
Ethernet, RS-422 and Parallel connectors for external control | Tascam DA-64001000BASE-T gigabit LAN is supported, and the work protocol is FTP (File Transfer Protocol). Access is possible from any kind of system, including Windows, Macintosh and UNIX.
External parallel/serial control

With SNTP support, the DA-6400 can automatically update its internal clock at regular intervals over a network, so accurate time information can be maintained.

Two expansion slots for audio interface cards on the Tascam DA-6400 multi-track recorderThe DA-6400 has two rear audio interface slots. By adding interface cards (sold separately), flexible support for input and output options is possible. For example, signal conversion of Dante/AES67 input to MADI output is possible. In addition, one slot could use MADI/Dante to record 56 channels as the main, while the other slot could use AES/EBU to record 8 channels as the sub. Furthermore, by using two AES/EBU interface cards, the maximum number of simultaneous input and output channels can be increased to 32.

MADI, Dante/AES67, AES/EBU and other digital input and output plus analogue output
MADI optical, MADI coaxial interface on the Tascam DA-6400 multi-track recorderAudio interface cards can be swapped from their slots, enabling flexible support for different types. The lineup of interface cards includes solutions for MADI, Dante/AES67, AES/EBU, and a planned analogue output and AVB to complete the line. Support is available for the recording studio and live systems of major manufacturers, so you can choose interface cards according to the application requirements.

Note: When using two AES/EBU cards, a maximum of 32 inputs and outputs at 96 kHz/24-bit resolution is possible.