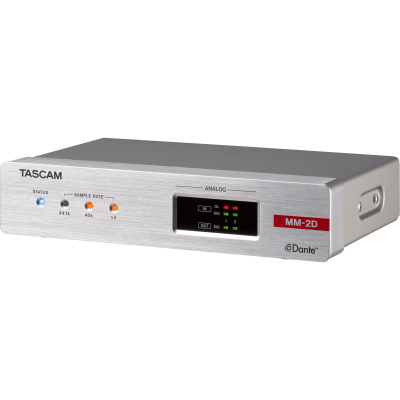 The MM-2D-E is an exquisite analogue input/output unit that can either convert two mic/line input signals into two Dante output signals, or two Dante input signals into two line output signals. In addition, it also supports four-channel Dante input/output as well, making it possible to use virtually any audio sources within an established Dante network. Available with Euroblock (MM-2D-E) or XLR (MM-2D-X) connectors for analogue inputs and outputs, this model can be used for a wide range of applications.

A key advantage of the product range is the DSP processor built into each unit. By providing not only mixing functions and EQ but also dynamic processing, automatic level control, auto-ducking, routing and noise compensation, even small systems can fully perform without additional signal processing or mixing devices. From the input of microphone signals to the output of powered speakers or recording devices, the Dante Compact Processor Series can build up a complete small system on their own.

Remote control is possible via two different software applications available for Mac, Windows, iOS and Android devices: Tascam DCP Connect for configuration and Tascam EZ Connect for end users, both of which are simple to use and included with the units. The MM-2D-E also offers the possibility to mute its inputs and control its output levels via GPI.

Space-saving break-out box for quick setups or permanent installation
As a compact 2×2 mic/line interface for Dante networks, the Tascam MM-2D-E is ideal where space is a limiting factor. Install it, for example, under a table or shelf in a conference room or broadcast studio, side by side with another device in a touring or studio rack using the AK-RS1 rackmount shelf, or place it wherever analogue ins and outs are currently required.

Studio-quality mic preamps for the clear and clean sound you expect
The MM-2D-E features two natural-sounding, high-grade mic preamplifiers made by Tascam with all the knowledge and experience cultivated through the years in the making of pro audio equipment. Input range covers from –74 dBu to +26 dBu, with equivalent input noise achieving less than –125 dB, and signal-to-noise ratio over 105 dB.

DSP features for everything your audio needs
The MM-2D-E incorporates a complete set of DSP functions for all the processing your input and output audio signals might need, plus mixing and internal routing. You can set gain, trim, phase, compression, 4-band EQ and more for each input and apply 10-band EQ, delay, limiting and other features to each output.

Built-in 6×4 mixer
Using the internal mixer, you can mix up to six input sources (two mic/line inputs with four Dante input channels) and create four different mixes which can then be assigned to Dante or physical outputs via the routing matrix. The mixer is also equipped with a ducking function and an ANC (ambient noise compensator) function, which detects the level of environmental sounds and automatically adjusts the input level of the source.

Store scene presets and recall them using timer events
You can save your input/output routings, mix levels and other settings as one of 50 presets. This makes it easy to switch between different types of events or environments. By using scene presets together with the timer event function* (which brings its own SNTP client), it is possible to automatically change settings at specified times.
*Timer event function is planned for a future firmware update.

Comfortable and reliable: Power supply via PoE
All DCP series models can be powered over the network connection (PoE, Power over Ethernet). This means you don’t need an AC adapter for each unit – there does not even have to be a socket at the installation site when using a PoE compatible network switch. This can lead to drastically reduced installation costs if a system consists of several DCP units.

Remote control via dedicated software
The MM-2D-E has comprehensive DSP functions on board that can be controlled by software on a laptop, tablet computer, or even smartphone. Depending on the amount of controls the user should have access to, you can choose between two types of remote control software:

Flexible routing through Dante Controller
Apart from its internal routing capabilities, audio to and from the MM-2D-E can be assigned to other devices via the Dante Controller, a configuration software used to manage all the audio devices in a Dante network. Our DCP models are also compatible with Dante Domain Manager which features security functions and enables the use of wide-area networks and subnets. This helps to easily integrate the Dante Compact Processor Series into already established network infrastructures. And with the AES67 mode, even connection to Ravenna and similar AES67 networks is possible.