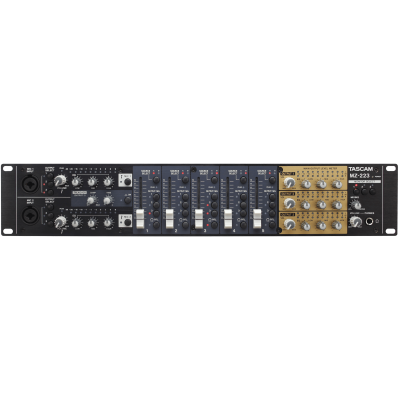 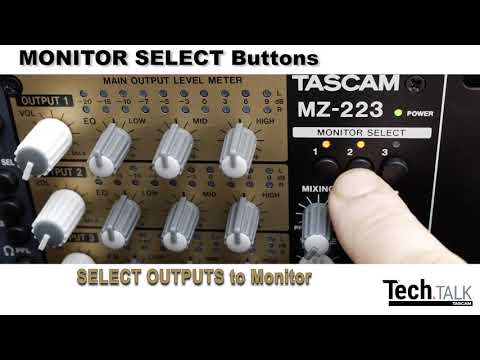 3-Zone Installation Mixer
The MZ-223 is a rackmount mixer designed for fixed installations in shops, public facilities, restaurants, bars, theme parks or hotels. It can be used to send background music and announcements from a variety of sources to three different rooms or zones. Each of the seven input channels can be routed to any or all of the three output zones.

The mixer offers five stereo input channels for line-level signals from analogue playback sources like media players, tuners or cassette decks. Two channels can be switched to phono to connect record players (turntables). Each channel has its own gain control, peak LED and level fader. Two additional microphone input channels – with level controls, LED level meters and 3-band equalizers – are available for announcements, speech reinforcement, karaoke or other uses with dynamic microphones. When used for announcements, for example, the built-in Talkover function can automatically lower the volume of background music according to the mic volume.

Each of the three zone main outputs is equipped with level control, LED level meter and a 3-band equalizer. There is also an independent monitoring output for the control room and a headphones output with level control that can be used for pre-fader monitoring of selected input channels and any of the zone outputs.

Many inputs for your playback sources
The MZ-223 allows multiple audio sources to be mixed, segregated, and routed to three independent zones or destinations using familiar volume sliders and assignment buttons. Audio signals can be input to five mixing channels, each offering two selectable sets of unbalanced RCA-type stereo input pairs summing up to a total of ten unbalanced stereo line inputs. Channels one and two can be set to accommodate phono-level signals for use with record players. Located conveniently on the front panel, two XLR inputs are available driving studio-quality mic preamps and a talkover (ducking) circuit for easy voiceover and announcement work.

Three independent zone outputs
The independent three zone outputs each feature a combination of XLR balanced and RCA unbalanced connectors for long cable runs or connection to common residential power amplifiers or powered speakers. This flexibility allows, for example, music to be routed to zone one, ambient noise or natural sounds to zone two and a separate music track or a voice announcement to zone three, while the convenient “Talkover” function will automatically lower any mixed output signal of the respective zones so the voices can be heard while using the microphones.

There is also a MONITOR output that can send audio to an external recorder to make capturing events easy or that can be used to drive additional monitoring loudspeakers.