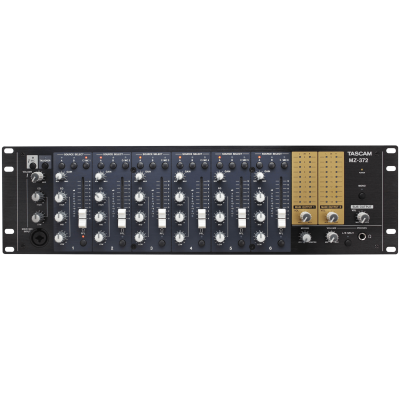 Six input channels can be used for microphones or line-level signals from analogue playback sources like media players, tuners or cassette decks, each equipped with gain controls, LED level meters, three-band equalizers and 100-mm faders. Up to three of these channels can be switched to phono to connect record players (turntables). An additional mic input with level control and two-band equalizer on the front side can be used for announcements or speech reinforcement. In this case, the built-in Talkover function can be used to automatically lower the volume of background music according to the mic volume.

Many inputs for your playback sources
The MZ-372 allows multiple audio sources to be selected, mixed and routed to two redundant outputs, controlled by familiar volume sliders and assignment buttons. Input signals can be inserted via six audio channels, each offering two sets of unbalanced RCA-type stereo pairs and a balanced XLR connector for a total of twelve sets of RCA-type inputs and six XLR inputs. Each set of input connectors can be selected as required by A/B/C switches on the front panel. XLR inputs can also be switched between microphone and line level. In addition, input channels 2, 3 and 4 can be set to accommodate phono-level signals for use with record players.

Multiple zone outputs
Dual main outputs each feature a combination of XLR balanced and RCA unbalanced connectors for easy integration into virtually any audio system. This flexibility allows combinations of microphones, CD/DVD/Blu-ray players, instruments or any other audio source to be selected and sent simultaneously to all of the outputs, each with its own volume control. The convenient “talkover” function will automatically lower the level of any mixed channel so the user of the microphone connected to the front panel can easily be heard in whichever zones you choose.

There is even a SUB output that can send the mixed signal to an external recorder which makes capturing event or music performances easy. The MONITOR outputs provide another stereo feed with independent control for additional monitoring.

There is also a MONITOR output that can send audio to an external recorder to make capturing events easy or that can be used to drive additional monitoring loudspeakers.