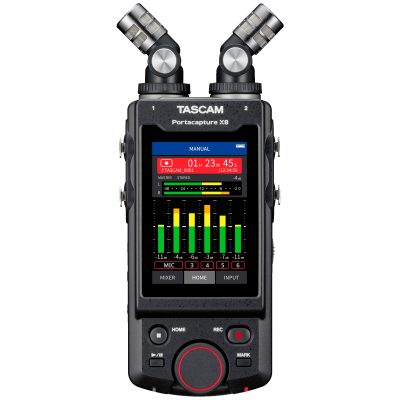 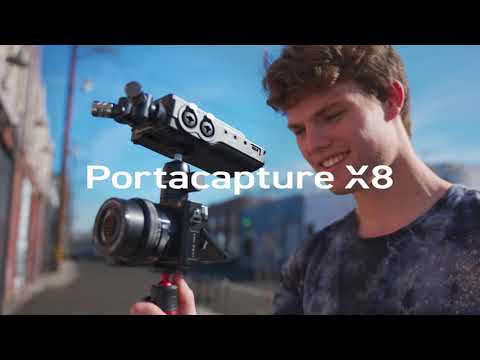 Tascam Portacapture X8 Innovative, powerful, yet simple
Right after start-up, the large colour touch screen of the Portacapture X8 shows the Launcher which lets you easily select the best audio settings that match your application. Taking advantage of these presets, you have more time to focus on the actual recording without having to struggle with complicated settings.

Should you, however, prefer to set everything yourself, the MANUAL app offers you all the possibilities to do so – including a Recording Guide that leads you through the required settings screens, if you like.

Set your levels with ease
The Portacapture X8 provides a preset level setting to achieve a wide dynamic range utilizing premium dual A/D converters and recording technology with 32-bit floating point resolution. The result is content with uncompromised audio quality even with low-level recordings. When editing the audio data later, you can increase the level without deteriorating the signal-to-noise ratio (S/N). Also, the internal normalize function can automatically align the level of the stereo mix file after recording. Combining these features, there’s no need to use valuable creative time finding the right audio level that matches the recording.

USB audio interface for your computer
Utilizing plug-and-go driverless functionality, the Portacapture X8 can be used as a compact mixer with built-in microphones for live streaming via OBS or similar platforms, and also offers direct recording of video narration and dialogue directly to DAW and editing software. The Portacapture X8 streams up to eight tracks (six inputs plus stereo mix) through USB. By supporting the USB Type-C Power Delivery standard, the unit can simultaneously supply any external microphone with phantom power via the USB bus. For video or audio conferencing, use the Portacapture X8 as your USB stereo microphone and even record the audio simultaneously.

Premium large-format microphones
The Portacapture X8 comes with two high-quality condenser microphones, each with a diameter of 14.6 mm – the largest in our lineup. Employing a detachable mechanism, both L and R mics can be flexibly attached to and detached from the main unit to form A-B or X-Y mic patterns.

Wireless remote control (with optional Bluetooth adapter)
The Portacapture X8 can be remote-controlled via mobile devices such as smartphones and tablets (iPad and Android devices) using the optional AK-BT1 Bluetooth adapter and the Portacapture Control app, which can be downloaded free of charge from the Apple Store or Google Play. In this way, you can, for example, record nature sounds in the wild without affecting the result with your own direct presence or your own noises.

Multi-track recording with up to eight tracks
The Portacapture X8 can simultaneously record up to eight audio tracks in total (six individual tracks + stereo mix). Select which inputs are recorded on which tracks, apply noise-gate, compression, EQ and reverb like you would do on a mixing console. The MANUAL app allows you to set levels and stereo positions for each of the six input tracks and create a stereo mix ready to be published as a podcast, vlog, song or other content. For the XLR/TRS inputs, Tascam know-how utilizing the in-house-developed HDDA (High Definition Discrete Architecture) mic preamps enables high-quality audio recording.

Four XLR/TRS jacks plus in and out for your camera and other equipment
With four professional, locking XLR/TRS combo inputs for mic- and line-level signals, the Portacapture X8 is prepared for most of your daily recording challenges. An additional mini-jack input and output each enable you to hook up your camera or other audio devices. When creating video footage, for example, you can record a guiding track with slate tones on your camera to simplify synchronisation during post-editing of the video material. The level of the camera output is adjustable and can thus be adapted to virtually any camera model. Of course, there is also a headphones output, which is powerful enough to keep you in control even in noisy environments.

Flexible handling – wherever you feel creative
The Portacapture X8 weighs less than 500 grams including batteries and can be mounted directly on a DSLR or camera or combined with AV rigs thanks to its rear cold shoe adapter. You can also attach it to mic stands or wireless receivers. Fastened this way, your Portacapture X8 is less susceptible to handling noise and your recordings turn out even better.

Note: When using phantom power, the operation time might be reduceddepending on the mic being used.