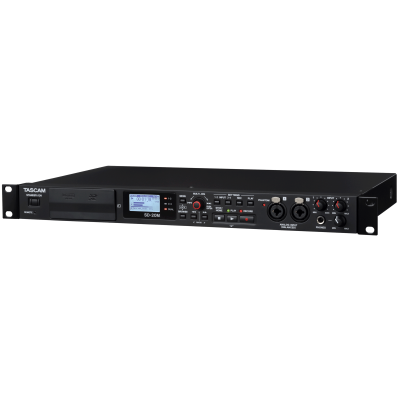 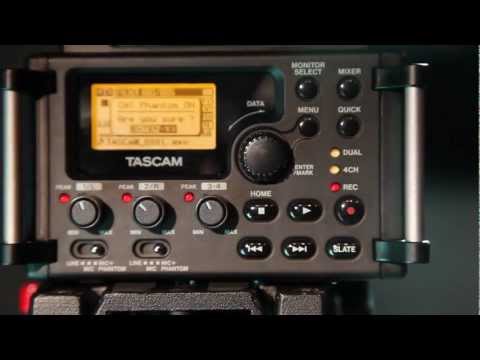 4-Track Recorder for Installation
The SD-20M is a simple-to-use solid-state recorder at a breakthrough price. The 1-U rackmount includes a pair of microphone preamps with phantom power for direct microphone recording. Both the mic inputs and line inputs can be recorded simultaneously in four-track mode. The dual recording mode captures a copy of your audio at a lower level, as insurance against distorted takes.

The SD-20M includes a battery backup system: AA batteries can keep recording for hours in case of power loss. A wired remote or footswitch can be attached to control recording and playback. Variable speed playback allows the playback to be changed without affecting the pitch.

Designed for installations like schools, house of worship, and conferences, the SD-20M is a flexible, affordable solution for long-form recording.

Record four tracks simultaneously
Microphones or equipment with line-level output can be connected directly to the two XLR/TRS combo inputs on the front. Their levels can be adjusted with the dedicated knobs.

During the recording of a meeting, for example, while recording the line outputs of the meeting system equipment via the recorder’s rear line inputs, you can simultaneously record two channels separately using microphones as a backup.

In a music classroom, studio or similar situation, you can easily set up a system for multitrack recording and other purposes using the line inputs for instruments with line output and the mic inputs for acoustic instruments.

The RCA unbalanced inputs on the back support –10 dBV line level input from mixers and other devices. Together with the XLR/TRS combo jacks a variety of devices can be connected.

(When the dual recording function is enabled, only two inputs can be used to record.)

Redundant power supply using batteries
In addition to the included AC adapter, the unit can also be powered by four AA batteries. If AC power is interrupted for any reason, the unit will automatically switch to the AA batteries and continue operating without affecting recording or playback.
Using batteries, you can even record anywhere in the field where no mains supply is available.

Easy media handling and flexible recording formats
This unit uses SD cards, which are very common and easy to obtain, as recording media. Audio files recorded with the SD-20M can easily be managed or copied like other data files using the SD cards themselves and a computer, for example.

Since the SD-20M supports SDXC cards with capacities up to 128 GB, you can continuously record even long meetings and rehearsals, for example, with peace of mind.

Record in WAV or MP3 format
The SD-20M can record in uncompressed WAV format (so-called linear PCM recording) with resolutions up to 24 bits / 96 kHz. This enables you to capture music concerts and other important events with high levels of audio quality.

You can keep the size of files created smaller by selecting the MP3 format. By using this format with a low bit rate, you can record for much longer amounts of time on the same card compared to when using WAV format. This can be helpful when recording meetings, discussions and other long events.

Convenient functions for your daily tasks

Start and stop recording automatically
The automatic recording function starts recording when an input signal is detected. For example, you can use this function to record a radio program. By setting a timer for a radio tuner and putting the recorder in standby, the SD-20M will start recording when the tuner turns on at the set time.

Set marks to easily locate to certain positions in a file
You can add up to 99 marks to a recording file as short cuts to the beginnings of songs, scene changes, etc. Moreover, marks can be added automatically in combination with the auto recording function. In this case, the SD-20M sets a mark each time the input level stays below a specified level for more than five seconds. To move to a mark position, use the skip buttons during playback or when stopped.