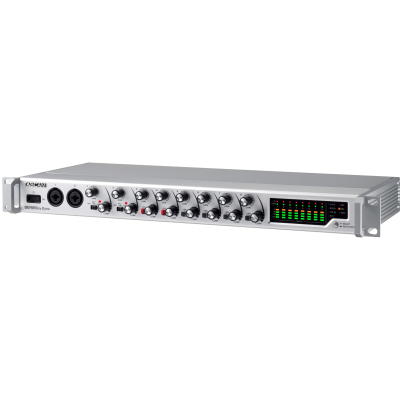 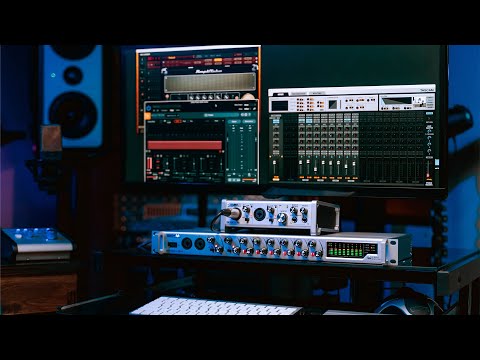 8-Channel Mic Preamp With Analogue Compressor
With superb audio specifications and connectivity and featuring an outstanding microphone preamp, the Tascam SERIES 8p Dyna is a great choice for both studio and stage. Housed in a rugged 1U rack-mount casing, its dual S/MUX optical ports make it a perfect expansion unit for a Tascam SERIES 102i or 208i or other S/MUX-equipped audio interfaces including ADAT, or use it as a stand-alone front end. In addition to eight separate TRS outputs, the SERIES 8p Dyna also has a multi-channel balanced analogue output that connects to an BO-16DX/OUT XLR breakout box, for example. And wordclock I/O ensures perfect synchronisation when using multiple units in parallel or operating with other professional equipment.

A Superior Front End for Studio and Stage
Tascam has long been known for transparent, natural, ultra-low-noise preamps, and the eight excellent Tascam HDIA (High Definition Instrumentation Architecture) preamplifier circuits in the SERIES 8p Dyna are its best preamps yet: The noise level (EIN) is at –127 dBu, the THD is 0.0007%, the dynamic range is 116 dB, and the crosstalk attenuation is 119 dB. An easy-to-use, single-control analogue compressor with true bypass on each channel handles hot input signals and creates smooth audio input.

Versatile Features
With two instrument/microphone combo inputs on the front panel, you can quickly plug in mics, guitars, bass and more. Six balanced mic/line inputs grace the rear. Every microphone input has individually switched +48V phantom power for using different types of microphones such as dynamic, condenser, ribbon and vintage for proper operation and safety. It adds up to a multi-purpose front end for recording and live sound.

Expand Your Interface or Other Device
Dual S/MUX optical outputs on the rear of the SERIES 8p Dyna enable you to use the unit as a front-end expander for S/MUX-equipped audio interfaces, such as Tascam’s SERIES 102i and 208i, and US-20×20. ADAT is also supported for compatibility with other devices. With two S/MUX outputs, you can send all eight SERIES 8p Dyna channels at up to 96 kHz (four channels at 176.4 kHz or 192 kHz) to expand your system’s capabilities with ease.

Send to Anything
The SERIES 8p Dyna’s eight line-level analogue channel outputs are provided on both 6.3-mm balanced TRS connectors and a balanced 25-pin D-Sub connector. Route signals to interfaces, recording mixers, front-of-house consoles, and pretty much anything else. Connect its D-Sub outputs to a Tascam ML-16D or ML-32D Analogue-to-Dante converter, and it becomes a pristine front end for an audio-over-IP network.

The Features Professionals Need
From its high-end preamps to its versatile outputs, the SERIES 8p Dyna is a thoroughly professional product, right down to its rugged metal 1U rack-mount enclosure. Word clock input and output connectors with an In/Out/Thru switch enable proper synchronisation of digital signals. By using, for example, the Tascam CG-1000 Master Clock Generator as the clock source for your SERIES interface and mic preamp(s), you can create a highly accurate digital audio recording system that meets even the highest demands.

Front-panel overload indicators for analogue input signals, compression indicators, and easy-to-read peak and level meter bars let you monitor the unit’s performance. Yet the SERIES 8p Dyna is simple to operate so you can stay focused on the task at hand.