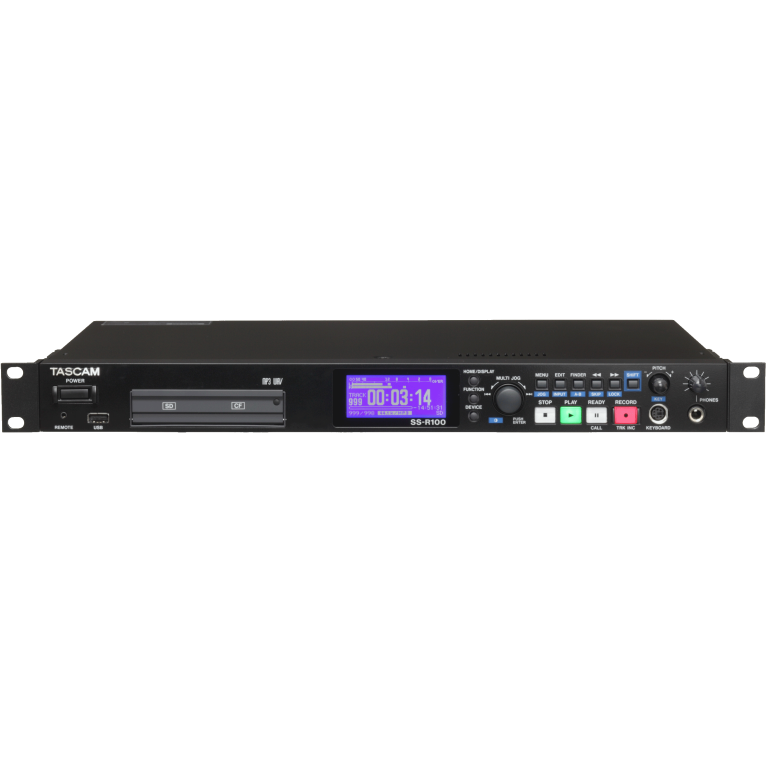 Solid State Audio Recorder
The SS-R100 is a single-rackspace solid state recorder designed for applications that currently use a cassette, CD or MiniDisc recorder. The SS-R100 records to SD, CF or USB memory in WAV format – or in MP3 format to achieve extended recording times.

Solid State technology provides hours of recording to affordable and secure media, and recordings can be transferred quickly to computers for editing, archiving or publishing on the internet. The SS-R100 is equipped with unbalanced audio inputs and outputs, SPDIF coaxial digital in and out with sample rate converter, a wired remote control and a computer keyboard input for folder/file naming and remote control. And, of course, users don’t need to do without traditional features like pitch control, key control, auto cue, and many more.

If you need balanced i/o and serial/parallel control ports, have a look at the Tascam SS-R250N. Users who want an additional CD drive for recording and playback may be interested in the Tascam SS-CDR250N.

More than you expect – in an affordable and extremely compact package
As the basic model in our range of solid-state audio recorders, the Tascam SS-R100 comes with unbalanced connectors and reduced remote control capabilities but is still feature-packed like you wouldn’t expect from a product of this class. It can be used equally well for minutes recording in court rooms, music playback in fitness studios or entertainment parks, smaller broadcast studios, theatres, PA touring or even be a musisian’s companion for practicing and master recording.

Three choices of reliable and secure media for playback and recording
The SS-R100 records stereo audio to CompactFlash media, SD cards and USB memory in WAV format – or in MP3 format to achieve extended recording times. Using solid-state technology makes it much more reliable and easier to use than any product using rotating media. Therefore, it can perfectly replace any cassette recorder, CD player or DAT recorder in town halls, banquet rooms or wherever these are still in use, reducing maintenance cost and enhancing versatility.

Flash start and other pro playback functions
When using the SS-R100 in broadcast studios, theatres or entertainment parks, its flash start feature helps you to start playback exactly to the point. You can preload up to 20 jingles, sound clips or music tracks in advance and use the optional RC-20 remote control to play each track without time lag at the push of a button.

Slow down or speed up the music
Using the pitch control feature you can lower or raise the playback tempo/pitch to adjust the audio to your needs. Combine this with the key control function to change the tempo only.

Key control to tune the music to your needs
Using key control during playback you can lower or raise the key of the audio without changing the tempo. Use this feature to tune the playback signal by ±6 semitones.

Auto Cue and Auto Ready for seamless playback operation
With Auto Cue enabled, the SS-R100 automatically detects when audio starts and pauses at that point. This is helpful for cueing sounds at theatres or amusement centres. The detection level can be set from –72 dB to –24 dB (in 6-dB intervals).

Auto Ready automatically stops at the beginning of the next track after the currently playing track finishes. This is convenient when playing tracks one by one in order to make announcements in between or to avoid accidentally playing the wrong track.

Edit files with frame accuracy
When searching audio using the Jog wheel or when editing audio material, you can use the frame display to locate with the same precision as with high-end MD recorders, for example. Editing functions include divide, combine, erase, and rename.

Prevent unauthorized persons from operating the device
When panel lock is enabled via the menu, operation is no longer possible from the front panel or from the included wired remote control. You can, however, use the optional RC-20 flash start controller or the RC-3F footswitch to control the SS-R100