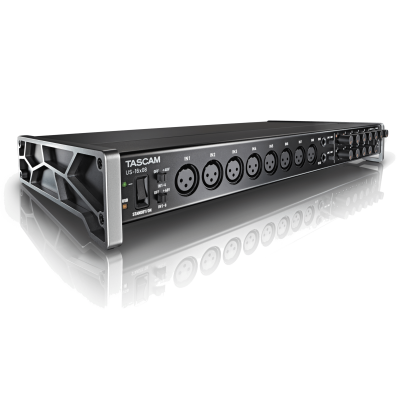 USB Audio/MIDI Interface (16 in/8 out)
The US-16×08 offers 16 mic and line inputs for your computer with clear sound quality and advanced features to manage big sessions. Eight Ultra-HDDA microphone preamps provide clean and quiet operation while delivering up to 56 dB of gain. An additional eight balanced line inputs are provided, two of them switchable to instrument level for direct guitar or bass recording. Eight balanced line outputs are also available, two with a level control on the front panel for monitoring.

Built into the US-16×08 is a DSP Mixer for low-latency digital mixing. Each channel has four-band EQ and compression for polished-sounding monitor mixes. In addition to interface mode, the US-16×08 can be used as a standalone mic preamp. Windows and Mac drivers are provided, as well as USB Class Compliant 2.0 drivers for tablets like the Apple iPad. MIDI input and output are also available on the rear panel.

Whether using the ergonomically-designed angled desktop stand or mounting with the included rack ears, the US-16×08 includes enough I/O for almost any music recording application.

Ultra-HDDA mic preamps provide pristine audio quality
Our original Ultra-HDDA mic preamps allow you to input high-quality audio from any audio source just by turning a knob. These are the same mic preamps that are in our HS-P82 professional recorders, which are popular in the broadcast and film industry. These versatile preamps can handle both condenser and dynamic mics, and will allow you to enjoy high-quality recording even if you are not an expert. These versatile preamps also feature line-level inputs for keyboards and other equipment.

16 analogue inputs to process vocals, instruments and drums simultaneously
With 8 XLR and 8 TRS inputs, a total of 16 simultaneous analogue signals can be input. Record an entire band during a live performance or rehearsal with ease.

The built-in mixer utilizes the high-performance BlackFin DSP processor making it possible to offer 4-band EQ and compression on each channel.

Support for iPads and other iOS devices
You will not need another audio interface if you decide you want to make music using an iPad or other iOS device. The performance of these interfaces has been tested with not only the bundled digital audio workstations (DAW), but also with other popular recording software – you can continue to use them even if you change DAW software. Since these units include MIDI inputs and outputs, they can also be used as MIDI interfaces.

Connect with an iPad or another iOS device
Tested with Sonar, ProTools, Cubase, Live, Studio One, and Garage Band
MIDI input and output enable connection with keyboards and other MIDI devices

Standalone use as an independent mic preamp
By turning the unit on without a USB connection, it can be used as a microphone preamplifier in standalone mode. After passing through the Ultra-HDDA circuits, the signals from the XLR inputs on the front are output from the TRS jacks on the rear of the unit. This allows it to be used for a variety of applications, including with interfaces and PA/SR mixers that do not have their own or less good preamps.

New features in Version 2.1
The internal mixer can be bypassed for situations when using an external microphone preamp
Select whether to allow the signal to be sent from PC to the stereo bus