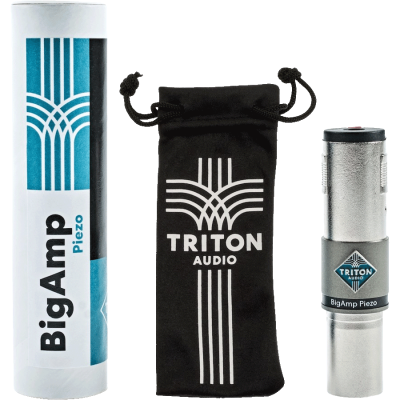 BigAmp Piezo is a small sized high-quality FET instrument preamp which performs equally well on stage as it does in a studio environment. It has a 1/4″ female jack input which accepts signals from piezo transducers.

BigAmp Piezo’s low noise class A amplifier provides 3 dB of high-end amplification followed by a low impedance, balanced output buffer which reveals every detail and offers high-end sound quality. The output signal of your instrument will convert from an unbalanced to a balanced signal.

Small form factor
An extra benefit might be BigAmp Piezo’s small size, making it super portable. Bring your own high-quality DI everywhere. No hassle with batteries because BigAmp Piezo ‘s circuit is powered with phantom power. The small form factor combined with the ease of use makes that every touring musician should have a BigAmp Piezo in their case or gigbag.

Piezo
A piezo transducer typically has an impedance of several mega ohms, which is much higher compared to the high-Z input of instrument preamps or mixing consoles. This prevents the transducer to deliver its potential output signal to the preamp and restricts transient response. Additionally, the high impedance combined with the capacity of the cable to the preamp forms a low pass filter, making a piezo transducer often sound uninspiring.

BigAmp Piezo is specially designed to overcome above issues. It has a 7.5 mega ohm input Impedance, which enables the piezo transducer to deliver its full potential. Signal amplification is low (3dB) to allow for the highest possible headroom. Because of its small size BigAmp Piezo can be connected as close to the transducer as possible which keeps cable capacitance to a minimum.